We are looking for new Members to join our ever so happy and friendly group, sing, dance, help backstage and have fun …..which is guaranteed!

It is planned to restart normal rehearsals on 20 July, subject to the dates in the Government Roadmap being achieved.

When our productions restart and you would like to be a part of our group – either on stage or helping – or require more information about the current Zoom sessions, please contact the Group Leader.

We are proud to present, in November, another new musical written and directed by our own Gill O’Flaherty.

‘Chances’ is loosely based on a true story of finding and losing love over the years, with highs and lows and modern songs that ties up and adds to the emotion of the story line.

Please click or tap on poster to view all details in  full-size.

The last production was ‘Staycation’ at the Civic Hall

This is a Musical Comedy written and directed by our very own Gill O’Flaherty.

The Synopsis:  A group of U3A members, who always travel abroad, have decided this year to stay at home – now called a ‘Staycation’.  They use a bus tour company and end up in some great adventures – travelling around Great Britain with song and dance – before returning to their Community Centre in Ormskirk.

Our next production will be an adaptation by John Hardiker of Tony Crimlisk’s highly acclaimed “Up for It”.

This is a great musical comedy first shown in 2011 and follows the true story of a  group of pensioners who travel to London to join in a rally in Trafalgar Square. They intended to strip off to protest against pension cuts (sounds familiar). For more information search the Internet for ” Naked Pensioner Protest”.

Arnold with his Tarts

Tom with his girl friends

All set up for strip in Trafalgar Square

Let’s have a dance

Some Great pictures from Musical Memories.

We Got Life is a generic story located internationally, told in song and dance. Beginnings, hope, reality, oppression, despair, dreams, inspiration, protest, revolution, escape, happiness, fulfillment and renewal. We hope that will reflect history as well as present day, expressing our lives, struggles and diversity and yet have the audience experience the sensation of that space between a tear and a smile with some well loved songs that have already touched our lives and a few ones to intrigue.

A Review from Katie and Shaun Geldart of the Pleasure Folk

This was a first for the group and a Comedy Farce in classic Brian Rix style, set in a large house in a remote village: a clinic that offers sanctuary, rest and relaxation therapy to celebs, but has seen better days with just two celebrities. Meanwhile in the same village there is an old folks home. Absolute chaos then ensues when the celebs get mixed up with the old folks, there is a power cut following an explosion, and a “Real” celeb then arrives. The old folks end up as staff, new premises have to be found with make shift rooms, then more chaos following a massive flood, in and out of doors, complicated manoeuvres, narrowly avoiding their naked forms. 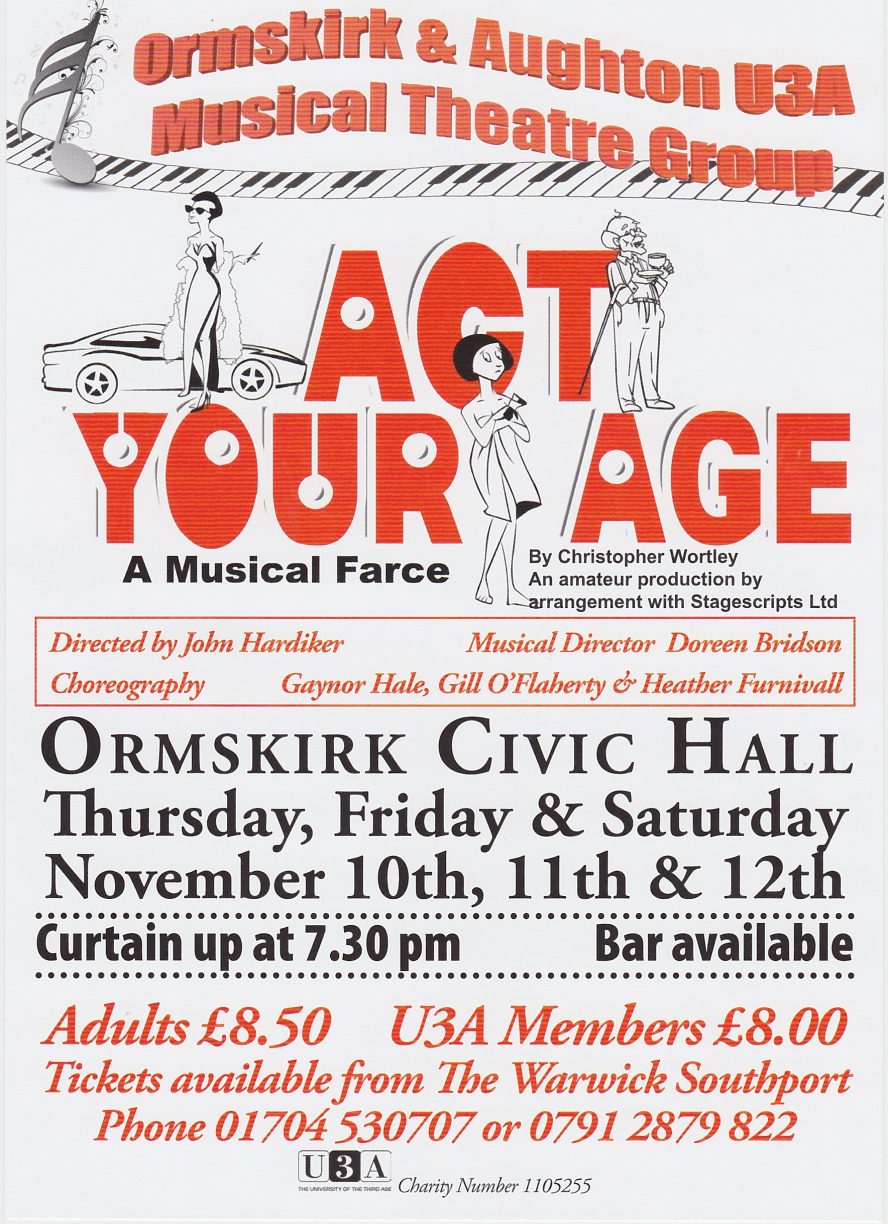 A good selection of pictures taken from “Act your Age “

Ann from St Helens U3A:- “Well done to the cast, we thoroughly enjoyed the performance, everyone worked so hard.”

Mary Hall – All Souls Dramatic club:- “Lot’s of hard work resulted in a very enjoyable evening. The fun and farce was in evidence right from the beginning and the stellar cast managed their energy and exuberance and voice throughout despite many playing more than one role. Given that many of the cast have never been on the stage before and that they range from 59 to 86, I feel that that they must be applauded and I for one look forward to their next production.”

Bill Howarth – Founder and member of Maghull U3A:- “They gave a very good account of their diverse talents and stage production in this performance of Christopher Wortley’s Musical Farce “Act Your Age”, an appropriate title for a cast of over 60’s, well prepared to do the title justice. It was evident that the riotous fun and repartee of the script had been well rehearsed and were reflected in the performance. Outstanding throughout were Valerie (Dorothy Prothero) and Pat (Maureen Morris) in “Stage Owning ” performances, with Angela (Gill O’Flaherty) bringing glamour to the set. The transformed cast in exciting costumes and a tricky moment involving towels complimented the main players. Both set design and lighting deserve credit for an outstanding set as does the Musical Director, Doreen Bridson. The journey from the old folks home to a celebratory clinic provided an abundance of laughs amongst many good performances. Well Done !!!”

Our Old Time Music Hall show is now completed and was a huge success, thanks to your support!  Both nights were very well attended and generated lots of smiles and laughter – which is just what we’ve all joined the U3A for!!

The show was directed jointly by the very talented Chris McCabe and Gaynor Hale who both have many years of stage experience behind them!  It was staged at Aughton Village Hall on May 13 and 14, 2016.

END_OF_DOCUMENT_TOKEN_TO_BE_REPLACED

Bob Cratchitt…retired was performed at Ormskirk Civic Hall in December 2015.  It was written by the very talented Eric

Midwinter, one of the founder members of the U3A in Britain.

It’s a sequel to Charles Dickens’ A Christmas Carol. Tony Crimlisk wrote the music, John Hardiker directed and Gaynor Hale was our choreographer.

We thank you for all your usual support for this very special show and hope it got you in a festive mood just in time for Christmas!

Some of the cast getting into the Christmas spirit!

Here are 2 reviews starting with a letter from Eric Midwinter, the author:

What a fascinating and glorious occasion! Although I’m supposed to be a wordsmith, I’m struggling to express how much it meant to me to see ‘Bob’ spring to life with such energy, pace, colour, laughter, dazzling effects, theatrical pictures, superb costuming, enthralling music, well-executed, rounded and adeptly comprehended characterisation…, to quote ‘The King and I’, et cetera, et cetera, et cetera. Knowing you are meeting up on Monday, would you please convey to everyone involved a most genuinely felt and affectionate vote of appreciation from the author.

My head is full of images, sounds and sights which keep rolling around and then turning up again…I think I can also add that the ‘top brass’ from the national U3A were seriously impressed; even by the interval they were overwhelmed by the sheer wonder of it all – ‘I have seen a lot worse in the West End’, said the current chairman; ‘I always knew it would be marvellous’ said the immediate past chairman, who has shown a keen interest in ‘Bob’ ever since I told her of his forthcoming existence. Such positive reactions – and well-merited

Thank you doesn’t cover it – but ‘thank you’. I hope to see you and, who knows, collaborate with you all again in the future.

And next, Jenny Robson wrote in the Champion newspaper:

Known for pulling out all the stops to create original productions this society’s latest effort is no exception.

With the script and lyrics written by Eric Midwinter and music by the society’s own Tony Crimlisk it is an upbeat story of Bob Cratchitt as he approaches retirement age.

A giant Christmas cracker opens the show through which is seen the interior of Scrooge’s and Marley’s shop (where nothing is ever knowingly undersold) with the Company looking festive in a flurry of red costumes with white faux (I hope!) fur.

It is Bob’s 65th birthday and, after 50 years of working in the store, the staff are holding a party to send him on his way clutching a gold clock.

Jane Morley (Dorothy Prothero) has been married to Jacob Marley and is now holding a torch for Ebenezer (Tony Adamson).

David Davies takes the eponymous role with Maureen Morris as his wife, Martha.

‘Tiny Tim’ (Colin Ratcliff) has grown up and is cured of his Dickensian impediment. He’s now a wealthy banker who lives in a 27-roomed mansion. Playing his snobby wife, Theresa, is Gill O’Flaherty who takes the comic role very well. It has been good to watch her progress over the past few years from choreographer and dancer to comedy actress.

The three inevitable ghosts (who ‘like to sing in chorus’) – Ghosts of Retirement Past (Bill Edwards), Present (Teresa Edwards) and Yet to Come (Sue Hardiker) arrive to convey the message that retirement does not have to be boring when the fabulous University of the Third Age is prominent.

The good pace of the show owes thanks to John Hardiker’s expert direction and Gaynor Hale’s clever choreography together with the vivacity of the cast, seasonal costumes and stunning scenery. Congratulations to the whole team!

A big THANK YOU to everyone who supports our productions; our group work very hard for many months to put them on stage and it’s very encouraging to know we can depend on you after all our efforts.

It’s a musical called ‘Bob Cratchitt, retired’ which tells the story of the character from Charles Dickens‘A Christmas Carol’ as he reaches retirement.  The musical is written by the very talented Eric Midwinter, one of the co-founders responsible for introducing the U3A to the UK during the early 1980’s.  The music has been written by our very own Tony Crimlisk and there will be more news about the production in the magazine and on the website as rehearsals progress throughout the year.

BayTV visited the group at one of our rehearsals and produced the attached video clip.