Mah Jong is a game for four players that originated in China. Mah Jong involves skill, strategy, and calculation, as well as a certain degree of chance. Even if you have never played Mah Jong, don’t be afraid to come along – it is a fun and easy game to learn.

In Asia, Mah Jong is also popularly played as a gambling game. In the game, each player is dealt thirteen tiles in a hand. On their turn, players draw a tile and discard one, with the goal of making four melds (three of a kind or a run of three) and one pair. Winning comes “on the draw”, by drawing a new or discarded tile that completes the hand. Thus a winning hand actually contains fourteen tiles.

We are a small friendly group who welcome newcomers to join us. It is easier to play than it looks, so why not give it a try?

Thanks to The Drama Group moving their meetings we are now able to have the room on alternate Fridays, which means we can meet more often.

With the current situation with the Pandemic there will be no further meetings until further notice.

Some members playing their tiles trying to win the game. 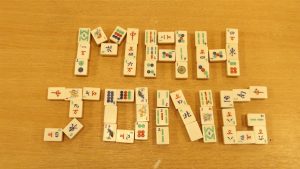