The Gardening Group provides members with an opportunity to share a love of gardening and horticulture.

It is planned to recommence on 8 September, subject to the dates in the Government Roadmap being achieved.

For some useful tips, quizzes and more, check out the Lockdown Gardening Newsletters in the Group Posts below this Page.

We would like to keep in touch with garden group members and we miss sharing ideas and information through the meetings so we wondered whether you would like to share your own ideas/tips/experiences with the rest of the group. One way to do this would be to email any information to Helen and then it can be coordinated and sent out as a group email by Helen.

Thanks to the U3A  Gardening Group  members (and a couple of other enthusiasts) that sent in photos of their gardens taken during this lockdown summer, the Web Team have created this interesting and colourful gallery.

END_OF_DOCUMENT_TOKEN_TO_BE_REPLACED

During this time of various levels of social distancing,  Gardening Group has been sending out excellent newsletters to the regular members of the group via email.

END_OF_DOCUMENT_TOKEN_TO_BE_REPLACED

Wednesday February 12 :  Yes, we have no Galanthus – A talk by Steven Halliwell.

An interesting talk with a ‘poetical’ twist and some lovely photos of mass plantings of snowdrops from Banks Hall, Gresgarth Hall, Dunham Massey, Lytham Hall, Brantwood, Parcevall Hall and Hornby Castle. There are hundreds of varieties of snowdrop mostly developed from 3 species

Wednesday January 8:   The Walled Garden – A talk about Norton Priory

A very interesting and informative talk given by Keith and Kathy Williams who have been volunteering at Norton Priory for about 30 years. The talk started with a brief history about the property and some interesting information about the numbers and roles of the gardening staff needed to look after the garden when it supplied all the produce for the main house. The only women working in the garden were  ‘Daisy grubbers’ which meant weeding all the gravel paths on hands and knees with special gloves which had hooks on the finger ends.   The talk then moved on to an illustrated look at how the garden has been developed and restored since the house was demolished and the garden abandoned in 1928. The walled garden is two and a half acres and has been redeveloped with reference to how Victorian walled gardens were generally arranged. The garden is divided into four quarters and includes various old varieties of apples and gooseberries as well as the national collection of quince, a croquet lawn and an orchard. The garden opens at the end of March is well worth a visit.

Jaqueline Iddon – Christmas from the Garden

A practical demonstration, making a blue spruce door ring, winter pots and other festive ideas to help decorate your home for Christmas. Jaqueline gave us a very entertaining and amusing talk whilst showing us how to make beautiful christmas decorations using foliage from the garden with added value glittery bits from the Range andHomesense! With both the wreath and the candle decoration it appears that ‘more is more’, similar to the hanging baskets and tubs that the group has seen demonstrated it seems that you need to use twice as many plants/foliage as you think are needed. Jaqueline produced beautiful creations and also showed us how to ‘jazz up’ potted plants to give as christmas gifts.

The meeting was a very entertaining talk by Tony Brougham on Autumn hanging baskets. Tony represents SSAFA (soldiers sailors air force families association) and he briefly explained the work of the organization and the support it gives.

Tony demonstrated planting up a hanging basket to look good from now until Easter and gave various tips to ensure success including aerating the compost as you fill the basket, adding a slow release fertilizer and using ‘egg water’ from boiling eggs –  3 drops in a litre of water to add calcium when watering.

The basket centerpiece was a red Cordyline and Tony then added 4 pansies, Ivy, Heather, Cyclamen, Ajuga and Heuchera. This produced a lovely full basket with immediate color and the Ajuga will start to trail over the basket sides as it grows. Alternative centerpiece plants could be a larger Heuchera or snow Lavender. Tony suggested watering should be done in the mornings when birds are around to eat any slugs.

Tony brought a fabulous selection of plants for sale at super reasonable prices which proved very popular with the group.

The basket that Tony made was raffled for SSAFA and raised £30.

This meeting included a show and share event, plant sale and a talk by Peter Gately. The event was a competition over 3 classes.

There were a fairly limited number of entries but hopefully now that group members have seen how it works we will have more entires for any future similar events. The plant sale table was well supplied with generous donation of plants from several members and raised £14 towards group funds.

Peter Gately gave a talk entitled a plant for every day and shared photos of his garden for each month of the year showing how it is possible to have something in flower all through the year. Peter brought a beautiful selection of flowers from his garden which are currently in flower including:

Peter particularly likes native plants and includes several in his garden which have a long flowering time including:

He also showed us photos of several lovely shrubs which are highly scented and flower through the colder months  including:

He gave us a very interesting and informative talk with lots of ideas for plants to include for year round color and scent.

Sue Gillon from Meadow View Plants brought plants for sale. The talk was very interesting and informative and Marguerite involved the members. She explained how colours could be used to affect the depth and perspective in the garden. She used plants and flowers to demonstrate the way colours work together e.g. hot borders for drama and instant appeal, while cooler for a calmer space.

The topics covered were:
Colour Clock
Colour Effects
Single Colour Schemes
Classic and unusual colour combination and many more. The way that colours are put together is more important in the overall garden picture than individual colours and is a very powerful weapon for a gardener!
Wednesday 13 March – Steve Halliwell, Public Speaker, Author and Biographer presented a talk on “Holker Hall – The Park and Gardens”.
Wednesday 13 February – Anthony Brougham presented “Miracle Planter”.
January – Cliff Porter, training officer and Geoff Todd, membership officer from Liverpool and Merseyside Beekeepers Association presented “Where would we be without Bees”. The emphasis was on how to encourage bees in to the garden. Several myths were dispelled.
Last Updated - Sunday, January 26, 2020

Newsletters from the Previous Gardening Group

Topic “Oh Dear! What can the ‘Machair’ be?

Steve Halliwell using his excellent photographic skills took us on a journey exploring the threatened Machair habitat in Hebridean Islands and the flora of the area.

The Gaelic word ‘machair’ means an extensive, low-lying fertile plain. Machair is a type of grassland associated with calcareous sand (mainly made of shell) which has been blown inland from beaches and mobile dunes. Strictly speaking, ‘machair’ refers to a flat sandy plain with dry and wet short-turf grasslands above impermeable rock. However, this term can also cover the beach, foredunes, dune slacks, fens, swamps, lochs and saltmarshes which together form a ‘machair system’.

Machair is one of the rarest habitats in Europe, found only in the north and west of Scotland and Ireland. It is estimated that there are 25,000 hectares of machair worldwide, with 17,500 hectares in Scotland and the remainder in western Ireland. Almost half of the Scottish machair occurs in the Outer Hebrides, with the best and most extensive areas in the Uists, Barra and Tiree.

The gardens were specially opened for U3A members, sadly the weather was not kind for the visit but those who attended thought the gardens were excellent. The visit lasted over two hours with our host Peter Curl taking time to explain various aspects of the garden to individual U3A members.

The gardens at 79 Crabtree Lane are part of the National Gardens Scheme which was founded in 1927 to raise money for charities. The garden at Crabtree Lane is ¾ acre in size and over recent years has been changed and replanted but still has many established and contrasting hidden areas. Patio surrounded by shrubs and alpine bed. Colour themed herbaceous and island beds with shrubs. Rose garden, fish pond surrounded by a large rockery and a Koi pond with waterfall, recently rebuilt and shallow area for wildlife. Spring and woodland garden, gravel garden with tender Mediterranean planting and late summer hot bed. Hosta and fern walk. A derelict, dry stone bothy and stone potting shed.

A garden visit that was enjoyed by all and one I feel sure many U3A members would wish to visit again.

The speaker Peter Cordall took us on a botanical journey across Tibet to Lhasa in which we explored the culture and also the alpine plants of the region. The Tibet Plateau  being home to the world’s largest distribution of Alpine plants.

Peter’s talk was a rare glimpse of the flowers of Tibet and will provided us with a view of a beautiful country which sadly most of us will never visit. We saw the culture of the area and visit the beautiful city of Lhasa which is rightly one of the most featured and dreamed about cities in the world. This is not only because of its  high altitude at 11,975 feet which  means remoteness and limited accessibility, but also because of its over 1,000 years’ cultural and spiritual history which leaves an impressive heritage that has helped to create the romantic and mysterious image of Tibet.

Peter is a former science teacher and currently Chairman of the Southport Alpine Garden Society Group. His interests in photography and the sciences has lead to his passion in flower and plant photography and he treated those attending to an enjoyable afternoon.

The speaker Steve Halliwell provided a packed meeting with an exciting and informative journey month by month around Gresgarth Hall Gardens. Using hundreds of excellent quality photographs he gave a comprehensive explanation of the changing colours, shapes and textures of the gardens. Steve held his audience enthralled by the shear beauty of the gardens so ably captured by his photography. It was clear that Steve was an expert in his subject and he held his audience spellbound.  Steve is has a keen interest in natural history and bird watching and is a respected author on natural history topics.

Gresgarth Hall Gardens cover 12 acres and are located near Lancaster in a valley cut of the surrounding fields over millennia by a tributary of the river Lune called Artle Beck. The sound of water is ever-present. The terraces descend from the house to the lake, and are planted with roses, clementis and more tender plants in season, and the predominating pinks, purples and silver-whites compliment the rugged grey stone of the Gothic house.  There is no doubt that Gresgarth is one of greatest gardens in Britain.
Last Updated - Monday, April 11, 2016

The speaker on Monday 14th March on the topic of “All you need to know about Fuchsias” was  Brian Houghton who has over 30 years experience of growing fuchsias. He is President and Secretary to the Merseyside Fuchsia Group also Chairman of the Wigan Fuchsia Society. He is a committee member of the British Fuchsia Society. Brian has a lifetimes interest in the cultivation and propagation of Fuchsias.

The meeting held on 8th February was an outstanding success with a record attendance of 120 people to hear Peter Gateley speak on the topic “A flower for every day”.

END_OF_DOCUMENT_TOKEN_TO_BE_REPLACED 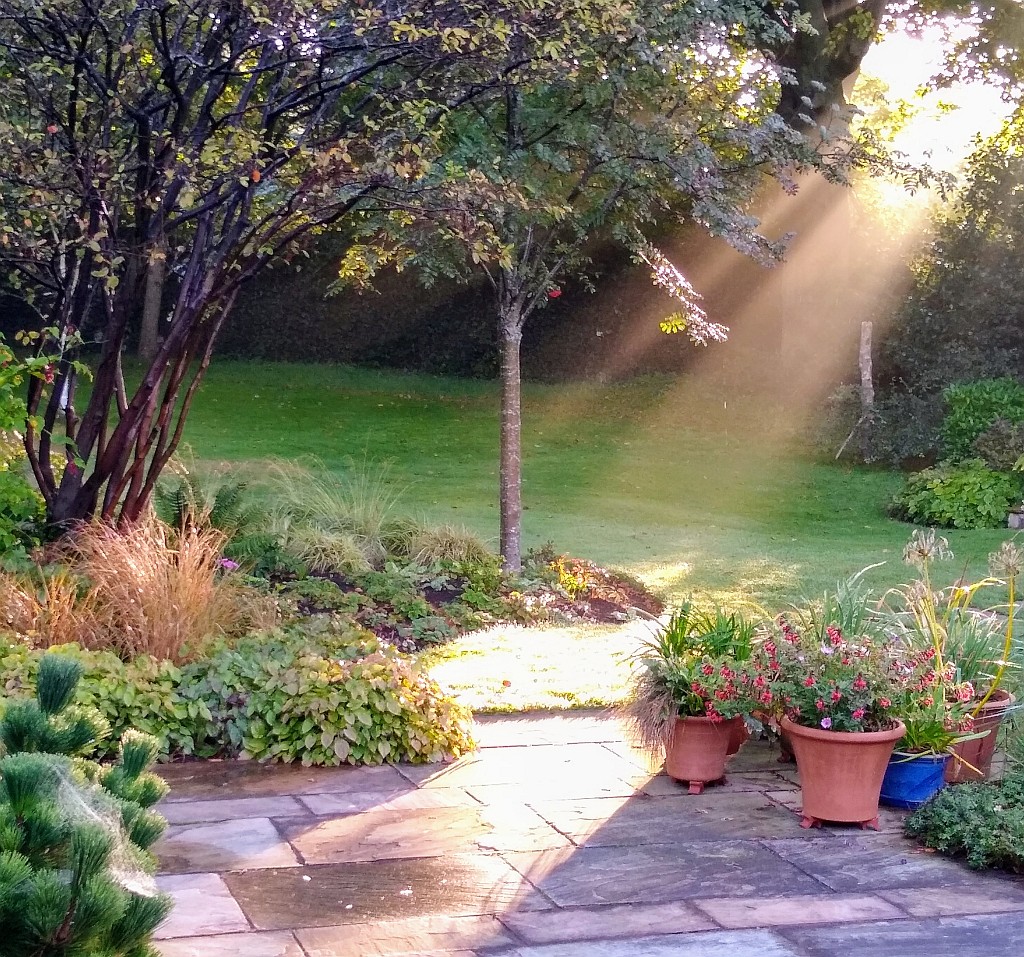